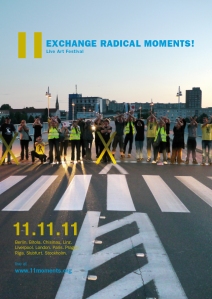 EXCHANGE RADICAL MOMENTS! Live Art Festival will be featured at this years conference, which the European Commission organises. It is an exchange of practice conference, where projects supported through the Culture programme are invited to share their experience and results with peers. The focus of the conference is on the topic of audience development, which will be one of the priorities of the new EU culture programme.
Conference program: http://www.cultureinmotion.eu/European-Audiences/projects.jsp 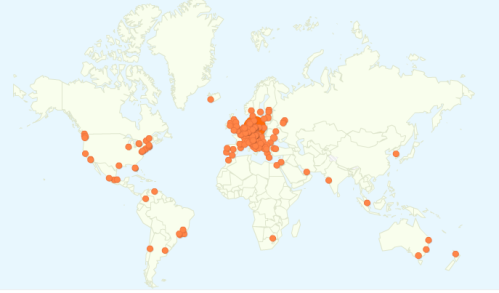 Have many thanks to all who helped that this event was a huge success. Thanks to all the staff, the artists and of course the bloggers who have posted their impressions on this page. Greetings to Manchester to our mirror project and warm greetings to our friends „PAersche“ and the “ELF” fromColognewho reported live on Exchange Radical Moments! from their perspective. 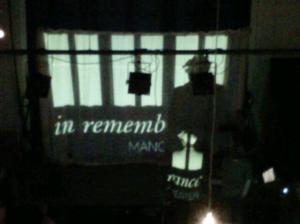 From 11pm till 2am come and join us at Platt Chapel for In Loving Memory. How do you document 11 hours of living art?  What do we the documenters remember?  Come to Platt Chapel for our wake a celebration of what we have just lived.  Hear the sounds, see what we saw read what we felt.  No matter whether you were here in the day – at 11pm we all remember together.

We felt the warm blood

The branches on our head

Visited the dead in their graveyard beds

Blasting out the soundscape of our nightmares 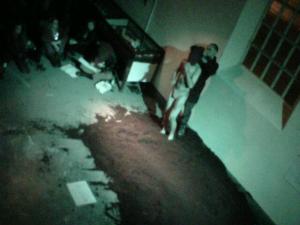 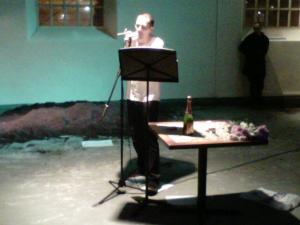 some impressions from KunstRaum Goethestrasse xtd at Linz

Berlin’s central station is an armored metaphor, the embodiment of our paranoid 21th century society, in which anxiety, information and control blend into an amalgam of surveillance instruments. Everything is electronically operated, every colorful feel-good commercial is backed by a camera lens. Welcome to our century, Foucault.

At least 100 surveillance cameras – it is likely that there are more – capture every visitor entering the massive halls of glass and steel. Day after day, security guards will see motionless faces pass through the gangways, escalators, and platforms. They will see people rushing, hustling, running and chasing – time is running, after all – to get to their trains before they leave them incarcerated at the station. Most people, don’t notice, but they are on camera, every second of every day, turning them into an absurd object of art, comparable with ants in an oversized terrarium.

And all of a sudden, time stops.

As he walks up to her, the fire in his eyes lightens up. His arm around her waist, holding and turning her as she swirls around him, effortless like a feather in the air. They connect, they merge, turn into one to the rhythm of an Argentinean Tango. People stand, stop and stare as the couple moves around the masses of metal and glass.

As the music fades, everything is over. Back to reality, back to Panopticon. Back being an object of art. Waiting for the next performance, for the next daydream in this freezing winter night. 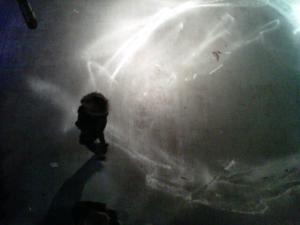 Leo Devlin, Fortifying no.4_marking his space with a chair_ branch with a single leaf_or him leading? 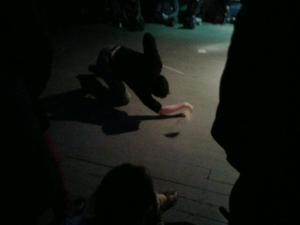 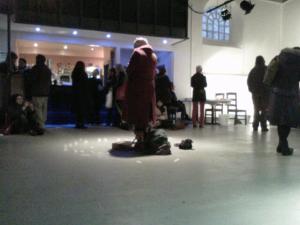 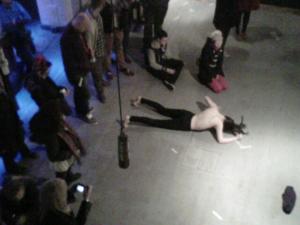 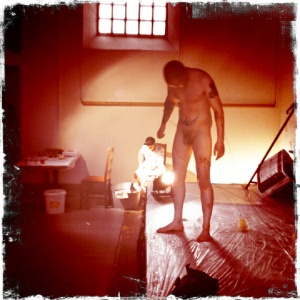 Hiding your sorrow like a friend who gives you

All you need to survive,

You won’t need your will again.

You surrendered a long time ago.

I put four hooks through my body for you,

I suspended our love from high above

till it broke my back for you.

I chose the way of pain, I walked and bled for you.

I always feel your shame.

I long for you

I’m vulnerable but no one knows that about me

I’ve fallen but no one knows that about me.

Silent over his inexperience the

Is only captured in the eyes

to all of you